Tuesday Tip: A Place For Everything 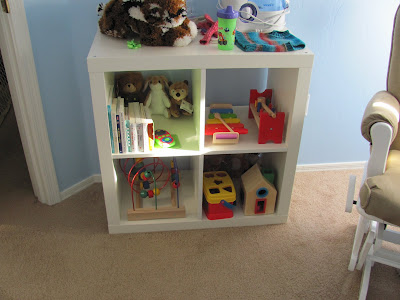 A few weeks ago I realized that my living room was never clean. It felt like every time I would pick up the toys A would throw them all over the place again and I'd be back where I had been. Before long I stopped being as careful about picking up my things and putting them away so shoes, water glasses, books, etc were added to the toys. Before long I was overwhelmed and in many ways gave up on a clean living room. I was always stressed and A wasn't terribly happy about it either because with toys all over the floor there wasn't room to play. Finally I realized what was going on and that I needed to get her toys under control. I got DH to help me and right before she went to bed one night we grabbed all of the toys and books out of her room and put them in the living room along with all the toys, books, etc that were out there. 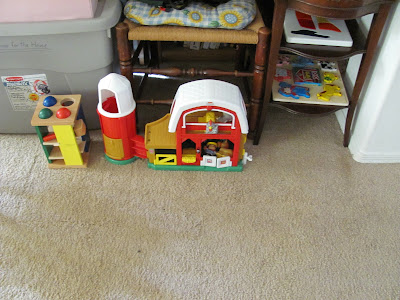 Once A. was safely sleeping we piled up all of her books in one place and all of her toys in another and started sorting. We started with the books because they were the easiest. She has a ton of wonderful books, but many of them have paper pages and she's already torn a couple while looking at the pictures. We sorted out the books that she might hurt from the board books. The books with paper pages we set aside for times that we are reading with her and stacked the board books on the coffee table to be put back in her room so that she could look at them on her own. We then started in on the toys. The toys were harder and really overwhelming. We have always tried to follow the idea of just having a few nice toys instead of a bunch of junk, but the pile was huge. It took up half the free space in the living room!?! We started sorting, first we put all the toys that she had outgrown in a box to save for the baby. At first I worried about this because I hold regular playdates and some of the kids that come are much younger. However, I realized that some of the toys like the felt balls are fun for kids of all ages so the tiny ones would still have something to play with (I was right, at the next playdate the babies loved playing with the balls almost as much as the toddlers). We then set aside the toys that I know A will love when she's a little older, but shows no interest in yet. Every month or so I'll get that box out and see if her tastes have changed, but in the meantime those toys aren't acting as clutter. Also, because they won't have been out the whole time, when she is ready to play with them they will be new and novel so I know she'll love them all the more for it. At that point, with a pile we still felt was giant DH and I went to bed. I figured we'd finish the next day after we'd had a chance to sleep on it. 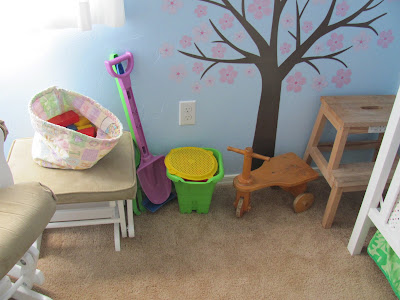 The next morning A woke up in a great mood and was having a great time playing in her crib so I ran to the living room and started grabbing toys. I started with the books followed by the toys I knew were her favorites and started putting them away in her room. When I was done I pulled her out of her crib and she was enthralled. She would pull toys off the shelves and then put them back!!! I was in shock, I was also surprised how much smaller the pile in the living room looked so I set to finding places for those things as well. In the end we didn't really have to get rid of anything, we just had to set aside the toys she isn't playing with. After we are sure we are done having kids we will obviously give away the toys that our children have outgrown, but right now we know that they will be used again in a few months. In the meantime, one evening of organizing has made a world of difference in our lives. Now that everything has a place A. can help me put away her toys before her nap and before bed. She likes helping us do it and our living room looks a lot nicer now too. The nicest thing though, is that now that all of her toys are accessible and most of the floor is clear at any given time A is happier to play by herself which give me more time to get stuff done. As new toys come into the house old ones will have to be put away or given away so that there is always space, but in the meantime we are all happier and didn't have to make any of the hard decisions I was fearing.

How about you, do you organize your toys or let them take over? I used to let them take over figuring that it would help A find what she was looking for easier if she could see them all. Now I know that, for her at least, it is easier to find something if it is where it belongs. I never expected that of so young a toddler.
Posted by Theresa at 12:16 PM