A week ago I did something crazy, I signed up for the Flats and Handwashing Challenge. The challenge was based on a news article that reported that poor families were leaving their babies in wet/dirty diapers for hours or even trying to reuse disposable diapers because they couldn't afford to buy more. It sounds crazy, but considering that disposable diapers cost anywhere from $0.18-$0.31 each I can definitely see the temptation when money is tight, especially considering the fact that even toddlers A's age use an average of 6-10 diapers a day and newborns may use upwards of 15. After all, with disposable diapers you are literally throwing away money each time you change your baby's diaper. The seemingly obvious answer for these families (and anyone else who is looking for a frugal diapering alternative) is to use cloth diapers. Yes, there is a start-up cost, but if you plan ahead and start buying while you are pregnant you can get the basics you need to diaper your baby for about $20/month until you're set-up and then diaper for the cost of a few loads of laundry per week for the rest of your diapering days (including future children). This is a great solution for those of us staying home with our children and trying to make one income stretch to cover a comfortable middle-class lifestyle that includes a house or nice condo with a washer and dryer. However, many of the families that are poor enough to have honest trouble affording diapers also don't have easy access to a washer and dryer or have to pay an arm and a leg for each load at the local laundromat which will pretty well negate the savings of cloth diapering. That was the basis of the challenge. Flat diapers are the cheapest diapering alternative as well as the easiest to wash. For between $60 and $80 you diaper your child from birth until potty training and they are thin enough that they can be handwashed and hung up to dry. Plus, some of them are really cute! 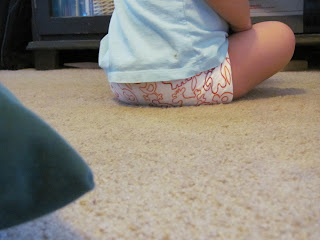 Now, you are probably thinking "that's great to know, but why would you volunteer for something like that when you have a perfectly good washing machine in your home?" I have two reasons, the first is that I got sick of people telling me that they couldn't afford the "luxury" of cloth diapers so they would be "forced" to use disposables. I wanted to prove to myself that it was possible to do this affordably in spite of excuses. My second reason is basic preparedness. While if something were to happen such that we couldn't use our washing machine for cloth diapers (either it broke or we were traveling/camping) we could always just buy disposables, I have yet to find any brand that doesn't give A. a nasty rash after a few days. I wanted to see if it would be doable to still use cloth diapers to spare her the rash if we didn't have access to our washing machine. With this in mind I talked to DH to see if he would be on board or if this challenge would mean I had to change every diaper for a week. He agreed to humor me and I did my best to make it easy on him by prefolding the diapers to make the diaper changes easier... 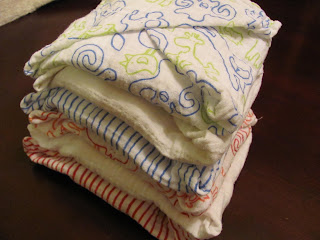 So how'd it go? Honestly, it wasn't what either of us expected. A. decided to start the challenge out with a bang and I got a "dirty" (as opposed to just wet) diaper for my very first one. I rolled my eyes and dumped the solids and continued to have an easy day. That night I washed the diapers and was shocked at how fast I was done (it took maybe 20ish minutes to wash everything). I hung the clean diapers up in the bathroom and went to bed feeling like I was on a roll. What I hadn't counted on was the lack of air circulation in the bathroom, half the diapers were still damp in the morning. I moved the drying rack into my sewing room and packed up the diapers that were dry for a daytrip of shopping, visiting family/friends and fruit picking a couple of hours away. The trip went well and we had a great time, the flats really aren't much harder than prefolds when you are on the go and that's something we've done for a while. That night I washed the diapers while DH was putting A. to bed and then moved the drying rack from the bathtub to my sewing room right before I went to bed which meant that they were pretty much dry by morning. Wednesday was a great day until my wrist started hurting so after a quick count of what was clean I decided to wait until morning and bite just bite the bullet and wash while A. was awake. Turns out that she was more than happy to play or watch while I was washing the diapers and since it was daylight I was able to hang the diapers up outside. Outside the diapers dried in less than two hours and the breeze helped make them softer, I was an immediate convert to washing during the day and the challenge seemed easy from there until Friday night when DH came home with the stomach flu...By Saturday we were all sick and Sunday morning was spent washing diapers while feeling really crummy. I have to admit it was really tempting to just throw everything in the washing machine when I went into the laundry room to get the detergent, but my stubbornness wouldn't let me. Instead I sucked it up and washed everything with the hottest water I could and some oxiclean just in case and then hung it on the line in the sun to help kill any germs that might have survived. It was a lovely, sunny, windy day and after a few hours the diapers were clean, soft, dry and all together lovely and we only had to make it through until morning to be able to say we'd done it. Comparatively the remainder was a breeze and DH actually kept using the flats after the challenge was over, though he threw them in the pail to be washed in the machine. He summed both our thoughts up pretty well when on Sunday night he said the challenge "really isn't that bad". Would we do it everyday? Probably not, unless there was a real reason not to use the washer. However, the flat diapers we were using are super cute and work really well. Handwashing, while not something I would choose, is doable in a pinch and we will definitely be keeping this in mind next time we want to go camping or travel somewhere that a washing machine isn't available. It's also nice to know that if the washing machine breaks I don't have to worry about A. getting a nasty rash in disposable diapers if it takes a week and a half for the parts to come in...I just have to budget a little extra time for washing stuff by hand. 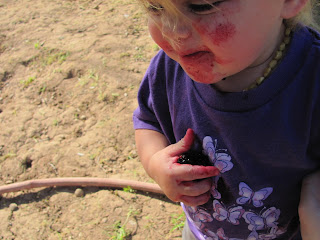 How about you, do you think this is totally crazy or worth trying? If you have a baby (or are expecting one) would you consider flats if money was really tight? Would you consider cloth in general for that matter if you had easy access to a washing machine, but money was tight? Would the cuteness win you over even if money wasn't tight? (Just idle curiosity on that last one :)
Posted by Theresa at 4:04 PM 2 comments: 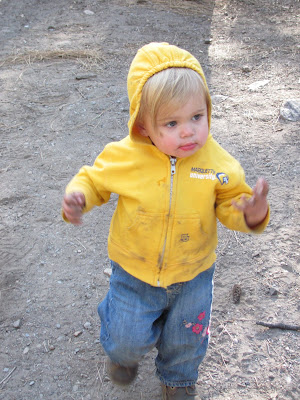 {this moment} - Inspired by Soulemama. In her words: A Friday ritual. A single photo - no words - capturing a moment from the week. A simple, special, extraordinary moment. A moment I want to pause, savor and remember. If you want to participate head over to her blog and enjoy!
Posted by Theresa at 11:10 AM 2 comments: