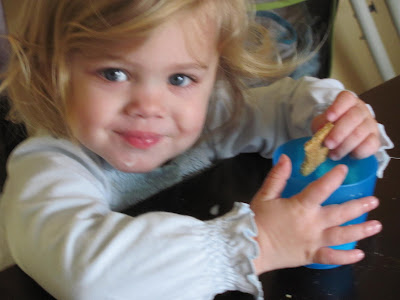 {this moment} - Inspired by Soulemama. In her words: A Friday ritual. A single photo - no words - capturing a moment from the week. A simple, special, extraordinary moment. A moment I want to pause, savor and remember. If you want to participate head over to her blog and enjoy!
Posted by Theresa at 8:28 AM 1 comment:

Email ThisBlogThis!Share to TwitterShare to FacebookShare to Pinterest
Labels: This Moment 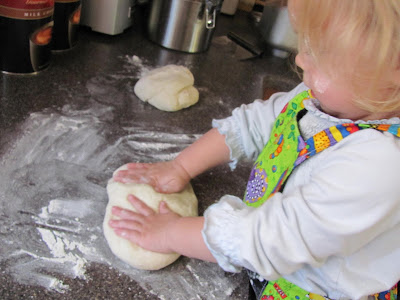 {this moment} - Inspired by Soulemama. In her words: A Friday ritual. A single photo - no words - capturing a moment from the week. A simple, special, extraordinary moment. A moment I want to pause, savor and remember. If you want to participate head over to her blog and enjoy!
Posted by Theresa at 11:57 PM No comments:

Email ThisBlogThis!Share to TwitterShare to FacebookShare to Pinterest
Labels: This Moment 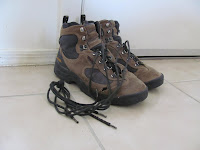 When I graduated from high school my dad and I went backpacking to celebrate. It wasn't just any trip either, we went all the way up to Wyoming and backpacked through areas he and his friends had visited back when they were young and stationed nearby. Since I didn't have a good pair of boots and was missing some other equipment we stopped at a sporting goods store in Denver he had frequented back then and I found a pair of boots that was just right.
The boots were perfect; they fit just right and were on sale to boot.
I wore the boots for that trip as we hiked up, down and through the Wind River. I was wearing them when I saw my first moose in the wild and when we set-up my new tent in a hurry because a rainstorm was blowing in fast. I wore them for hikes with my dad closer to home and I took them with me when I went off to college. I wore them for field trips when I was studying Wildlife Science. These were the boots I wore the day my whole class woke up to sheets of ice covering our tents at a wildlife refuge in New Mexico. They were the boots I wore on a three day trip to Organ Pipe and down into Mexico. They took me over hills and down into valleys in search of birds, plants, and animals that we were studying. In college I also met a guy that I kinda liked who had been in Boy Scouts as a kid and a teen. We talked about hiking, camping and backpacking along with other things. We started dating, but he wasn't exactly great at figuring out where to take me for a date other than out to dinner. Eventually he suggested we go hiking together so he could show me some of the local trails and I wore those boots for what was probably the first date we went on that was more than sharing a meal. As time passed I introduced him to dispersed camping and we explored some of the local trails together. Eventually that guy became my husband and he learned that anytime I was having a bad day the best thing he could do was toss me my boots and day pack and take me for a hike or even send me out on my own*. I wore those boots when we were hiking every weekend even after I got pregnant with A. and they helped me keep my balance the whole time. Having kids might put a damper on the time outdoors for some, but we did our best to just bring the kid(s) along. Through the years I kept wearing those same boots my dad had gotten me when I graduated high school. They were starting to get worn, but they still did the job. I wore them for A's first camping trip and when we took her on hikes in the nearby mountains. 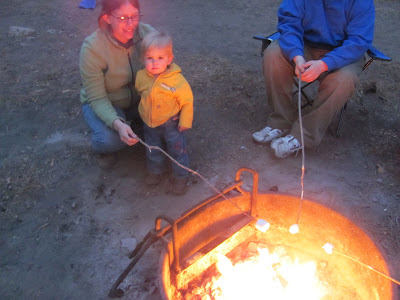 After T. was born we haven't been as good about hiking so my poor boots have had to sit in the closet. Over the weekend the weather was beautiful so we called up some friends and met for T's first hike. Yesterday I realized just how worn my boots had gotten. The soles are as slick as tennis shoes thanks to the hundreds of miles that they have walked with me. The upper on one is torn because these are, after all, over ten years old. I have replaced the insoles at least twice, but they have lost a lot of the support they used to offer. I made a mental note to start looking for a good price on boots since new boots (at least ones that will last me another ten years) are pretty well out of my price range. Then, last night we stopped at REI on the way home because my husband needed to run in for something real quick. When he was there he noticed that they had a bunch of shoes and boots leftover from the REI garage sale preview event over the weekend including some Vibrams that he thought might fit me. Since both kids were asleep in the backseat he stayed in the car while I ran in...I didn't see any Vibrams in my size, but I did notice a nice pair of boots. I looked at the tag and they had been marked down from $175 to $65 because they had been worn outside. I checked the soles and they were dusty but brand new. I wavered for a minute because $65 was more than I was planning to spend right then, but I knew it was a good deal for the boots. After a minute I decided to at least try them on and found that they fit perfectly. They didn't have insoles, but I use prescription orthotics in my hiking boots anyway and I happened to be wearing my old boots and hiking socks since we were just coming back from a hike. Sure enough they fit perfectly and when I put the boots on they fit my feet perfectly too. I decided to bite the bullet and buy them anyway, but I knew I would have to hurry as the kids (and hubby) wouldn't be happy sitting in the car waiting for me too much longer. I ran down the the register and when they rang them up I learned the true price...you see, the sale had ended the day before and they just wanted to be rid of them. I bought a new pair of boots for $10.85 plus tax! 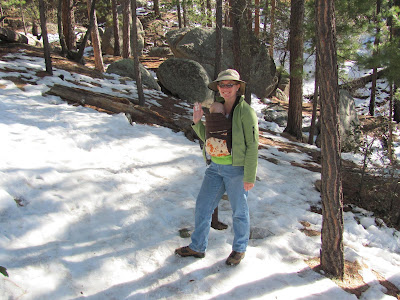 I love my new boots and can't wait to take them out next weekend, but at the same time I can't help feeling like it is the end of an era in some ways. My old boots are trashed, you can zoom in on the first picture and see that, but they have also been my boots for over a decade. They have served me well in times of stress and transition. They have seen me through all the major transitions in my life. They where there when I left my parent's home and made a place for myself in the grown up world. They were there when I was figuring out how to deal with a roommate I didn't like and when I met my husband (who I like rather a lot). They were there when I needed to stomp through the woods for class field trips because I decided to study wildlife science instead of engineering. They let my husband and I go on fun (and free) dates through our courtship and early in our marriage. They were on my feet when A was driving me nuts with teething. They have made it easier for me to introduce the wonders of the outdoors to my kids. Maybe I'm a little overly sentimental, but I will miss these boots...I'm looking forward to all the hikes and memories that my new boots take me on though. Here's to hoping that the new boots will see as many miles and memories as the old ones. 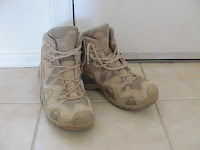 * Please note that it isn't a good idea to go hiking on your own unless you know what you are doing and are properly prepared. Just having a cell phone when you are in a remote area is not enough as you may not have service. Please remember to hike safely at all times.
Posted by Theresa at 2:00 PM 1 comment: