I'll never forget the first time I had Indian food. I was home from college and my sister decided to drag me out for a girls night with her friends. I was a little worried because Indian food seemed so strange, but I'd had a roommate who'd loved it and my sister tends to have good taste so I figured it was worth a shot. The place we went had two menus, the one in English with descriptions of what each dish was and prices in the $6-$10 range and the one that wasn't in English with prices in the $4-$6 range. I ordered off the second menu and loved the food (though I still don't know exactly what it was I got), especially the naan that came with it.

I always figured naan was one of those specialty breads that was just too hard to make at home and would occasionally buy some from Trader Joe's. Then, while mindlessly watching PBS while attempting to knit a lace shawl Baking With Julia came on and the episode was all about how to make naan. I grabbed the post-it notes and pen from by the phone and wrote frantically. Now when I want Indian food and am feeling kinda lazy on the cooking front I'll make up a batch of naan along with the premade entrees from Trader Joe's and some rice. I rarely remember to do this, but on Friday my sister mentioned that she was making Indian food, but that she'd yet to find a good naan recipe so I emailed her this one. She agreed, it's perfect. Since that conversation I have been craving some myself so today I made a batch. If you want to make a batch too I've included the recipe below.

Put yeast in a large bowl, add the warm water and stir them together. Slowly add flour (first stirring and then kneading) until it forms a soft, slightly sticky dough. Put the dough in a lightly oiled bowl, cover with a damp cloth and let it rise until it has doubled in size. Put a pizza stone in the oven and preheat it to 500F*. Punch it down, knead it a bit on a heavily floured counter and divide into 4 pieces. Divide each quarter into 4 pieces and knead them a bit more and then roll them into flat, rounds about 1/4" thick. Stab it all over with a fork to keep it from rising up in the oven (this is the main difference between naan and pita bread), sprinkle with water and then add toppings. The original recipe called for salt, green onion and caraway seed. I like garlic salt or onion salt, I'm told that traditionally ghee (or clarified butter) is used too. Put the rounds on your preheated pizza stone and bake for 6 minutes. Enjoy!

I generally do 2-4 at a time because that is what fits on my stone. There is then plenty of time to prep the next ones while those bake. 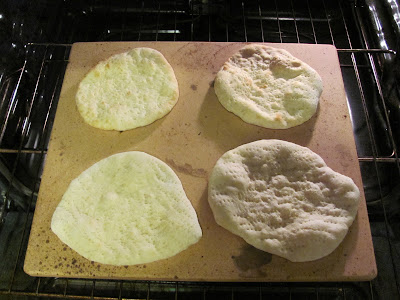 *Make sure your pizza stone is rated to at least 500F, many are only rated to 400 or 450 and may explode when you put wet dough on them. I think that this is the one I have after I exploded the last one.

ETA: This is now linked to the Tasty Tuesday Parade of Foods at Balancing Beauty and Bedlam. Check it out for lots of tasty recipes.
Posted by Theresa at 7:21 PM