To Be or Not To Be a Princess?

A couple of days ago a friend linked to this article about how the "princess" culture is taking over for little girls. I shared the link and the dichotomy of the responses was interesting. I have to say, as the mother of a little girl, I feel princesses and pink really are overdone. While I think that the author goes overboard on keeping princesses totally out of her daughter's life I can see where she's coming from. When you find out you are having a little girl you can pretty safely assume that you will be given a plethora of pink clothes unless you specifically request otherwise (and sometimes even then). Your daughter will be called a "princess" by pretty much everyone. 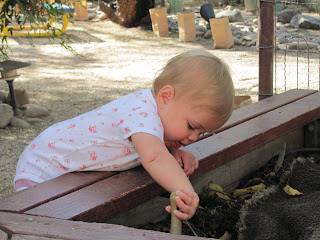 If someone sees her digging in the dirt without a bow in her hair it will be assumed that she is a boy, even if she has pink flowers in her shirt. Random strangers (like the UPS guy) and friends alike will question why you painted the nursery blue if you are expecting a girl. This has caused many of us mothers of daughters to rebel. A part of me honestly wants to say "no pink, no princesses, and no dresses". That said, I then think back to my own childhood and I realize I could never be quite that strict. My bedroom was painted pink, at my insistence, from the time I was 8 until I was 15 or 16 when I decided to repaint it. I loved Cinderella and even dressed as her one year (though I made my own costume out of a junior bridesmaid dress I had, I didn't buy one of the premade Disney ones). While I don't wear dresses often, I will sometimes and they make me feel pretty.

This begs the question of where to draw the line. This is a line that will be different for each family, but one that should be drawn none the less. The easiest place to start drawing the line is with colors. Pink is a great color, especially on a girl like A. who has blond hair, blue eyes and a rosy complection. However, she also looks smashing in blue (to match her eyes), brown, green and even gray. In many ways these colors look even better on her than pink, but pink is the color that most little girls clothes come in. My goal with pink is not to exclude it, but to keep it equal with all the rest of the colors. With the nursery we painted the walls sky blue and did a jungle theme because we knew we were planning on keeping the theme for the next kid and switching A. to a "big girl room" when the time came. After much debate we've decided to paint the room green and have a mix of white and light wood furniture. There will be some pink and brown accents and we are really excited. (I'm hoping to make A. a quilt for her bed that will go with the floral/woodland/garden theme we are choosing, but we'll see how that goes.) Her room will have some pink, but also lots of other colors. The same goes for her clothes, some are pink, some are purple, but some are blue and brown and white too. I don't wear the same color every day so why should she? Pink can be a good color, I'd rather we not all get tired of it before her second birthday.

The next question, in order of ease to answer, is dresses. Dresses are pretty, but they are rarely practical. This is especially true when you are a toddler. I will let A. wear dresses when she wants, but right now she climbs so much that they would be a hindrance (hmm, maybe I should encourage more dresses to make chasing her easier). Right now she likes to run and climb and dig. Dresses are great for more formal occasions, church or other places where she will be sitting still and we have a few just for that, but mostly she wears clothes that she can move and get dirty in.

Now it's time for the hard question, princesses. As a kid I loved the Disney princess movies. I watched Cinderella so many times that I could sing the whole soundtrack and quote most of the words. I loved Beauty and the Beast and wished I was a brunette so I could look like Belle (sometimes I still do). However, this was all when I was older, I was old enough to understand the difference between real life and storybooks. Many of the "princess" themed things on the market today are aimed at toddlers and preschoolers. Little girls that are just beginning to figure out who they are and how the world works. They are just learning how imagination works and pretending to be a character in a story can stifle that. After all, which is more open ended, pretending you are the fairy princess trapped in a tower and playing through the act to see what happens or pretending you are Cinderella going to the ball to find your "happily ever after"? In the first example the prince might rescue the princess, or the princess might get bored waiting and slay the dragon herself, or maybe even rescue the prince. In the second you are pretty much following along with what happened in the movie, sure you might embellish some, but the main plot is already established. The second issue I have with the Disney princesses in particular is the assumption that "happily ever after" is automatic just because you met your prince. In the movies the princes are all one dimensional creatures that have little more than a title and looks to recommend them. Is this the kind of man you want your daughter to marry? Do you want her to assume that simply because she is married that she will never have to work on her relationship, that they will live "happily ever after" no matter what? Should she assume that her "prince" will take care of everything and she'll never have to lift a finger or do her share in the relationship? That's a good way to wind up unhappy and divorced. If you want to point your daughter towards a princess to emulate, why not point her to some of the real life princesses? Many of them have been very strong women who have put duty, honor and country ahead of themselves. They have had their share of sorrow and tragedy along with the pretty dresses and giant parties. They have worked and sacrificed and been strong for themselves and others. Their stories might not be all glitter and gowns, but many of them are wonderful role models for older girls. While we are at it, why not teach our daughters about the many other strong, intelligent women in the world. The women mathematicians during WWII that spent their days calculating the ballistics tables for the army or working on the Manhattan Project. How about the women who were off flying planes or working in factories so that the men could be freed up to fight. Or the many brave women, even today, who keep the home fires burning and the children safe, fed and well mannered while their men are off serving in the military. Why not teach our daughters about Marie Curie, Jane Goodall or the women's rights movement? Princesses are alright in their place (once girls are old enough to understand what that place is), but why should they displace so many better things? I love escaping into a good, fun or just plain fluffy story as much as the next person, but that doesn't change the fact that at the end of the book I have to be fit to return to real life.

I want my daughter to be an intelligent, strong, well rounded, insightful, honest, hardworking, loving women. I want her to be able to earn her daily bread, care for children if she chooses to have them, support herself and her family as needed or be content in the knowledge that staying home can be just as important. I want her to be able to find a good man, or to be able to live life contently on her own if she can't find one that meets her high standards. I want her to be able to act like a lady, while still retaining her own strength. Most importantly, I want her to figure out who she is, not who someone else thinks she should be. Princesses and playing dress-up can help her in this, but I am not convinced that blindly following the princess trend will.

My goal is to push off her exposure to Disney princesses, Dora the Explorer, Barney and Friends, Lightning McQueen, Thomas the Tank Engine, or any other "licensed" characters as long as I can. This isn't to say that I think that these shows and movies are bad (many of them a lot of fun), just that I don't like the idol worship that goes along with them. I hate that toys are sold to the kids instead of the adults. I hate that the goal of marketing is to convince children to pester their parents until the parents give in and buy the latest "it" toy. I also hate the peer pressure that is associated with this. The idea that you are somehow not as good as the next kid if your parents don't buy you a certain thing. This is not what I want to teach my daughter. I don't want her to value things more than people or good character. At some point we will watch Thomas and Friends (assuming I can get over the fact that Ringo Star isn't Mr. Conductor anymore). We will also sit down together and watch Cinderella and Beauty and the Beast. But I'd rather wait until she's old enough to understand that it can be just a story on the screen and doesn't need to be a way of life.
Posted by Theresa at 1:33 PM