It seems like every "good" parent starts baby proofing before their first child ever gets here. There are tons of gadgets and gizmos available to make this easier. I don't know how many friends have had a whole slew of baby proofing gadgets on the registries for their showers and in some cases these gadgets are quite handy (though maybe not shower appropriate, I'm sure they are in it for the discount). That said there are other things that I find rather crazy. I really don't know that posting a sign on your car stating that it contains children will do anything to enhance their safety and posting anything on the windows can impede your visibility. I also feel that spending $3.50 for two little gizmos that will prevent a door from closing all the way to prevent pinched fingers is a bit much, if I'm worried I throw a cheap prefold in the door frame on top of the top hinges (the Gerber ones have to be good for something, right?). Given a choice I would like my home to continue to look like a place where grown-ups live too instead of like an exploded playroom.

To that end I have been taking a bit of a different approach to baby proofing. I've been doing it on an "as needed" basis. Now, before I get emails and comments telling me that I'm putting my baby in danger or some such, let me state that I have a very hands on parenting style. It is hard for a little girl to get into trouble when Mommy is close enough to grab her before she reaches the electrical outlet/entertainment center/sleeping dog/cabinet full of glass/climbable bookcase. For the most part I try to let her explore her world and give her space when she is playing quietly (or loudly for that matter) in the middle of the living room floor. If she starts moving towards something that could be a problem I quietly move closer and watch what she's doing ready to intervene at any moment. Frequently she will lose interest after a couple of thwarted attempts, but if she doesn't then I "baby proof" it. This may mean securing an item in some manner or moving a chair in front of it or even just putting it on a higher shelf or in another room. For the most part this works really well for us. An old milk crate in the living room to house her toys and some creative furniture placement (most of our living room furniture is light enough I can easily move it on my own) and we have a space that can go from kids play area to grown-up entertainment area in 5-10 minutes. This arrangement has led to minimal baby proofing while still allowing a safe environment for exploration. I don't know if anyone else is interested in this or not, but here are some of my minimalist suggestions.

One of the easiest ways I've found to baby proof the shelves is to simply move a chair in front of them. While attaching them to the wall is very important if you have a baby that climbs the shelves our biggest problem is actually the books and such being pulled off the shelves. Eventually I would like to have wall mounted shelves that are start high enough that kids can't reach them (preferably over a piano, that that's a different story). In the meantime a ladder back chair placed in front of the shelves we have removes the temptation. I have also found that in some cases it is just easier to install a baby gate. 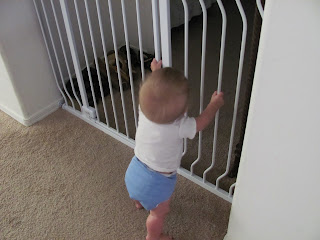 My husband and I don't want to baby proof our bedroom. It is our space and we feel that children of any age should not be in there unsupervised and without our permission. For a long time we had just been redirecting our daughter when she tried to explore our room and putting up a baby gate when other babies were visiting so that the dogs had their own area. The big problem is that there is a bookcase with a lot of old books just outside the door to the master bedroom that seems to be a magnet for little hands. After more time that I want to think about spent attempting to redirect and frequently physically removing a certain little girl from that space we decided a baby gate was in order. We decided to spring for one of the ones with a door in it so we don't have to worry about stepping over it or removing it. We love it, Audrey, not so much. While we were at Home Depot picking up the gate we decided to get a couple off the outlet covers that have sliding covers on them. After looking everywhere and failing to find them we finally tracked down a person to ask. It turns out that they now have something even better. You can now buy tamper resistant outlets that look just like a normal electrical outlet and work just like a normal electrical outlet if you are plugging in the vacuum, but that you can't stick a bobby pin in. Basically the have a little gate just inside the plug itself that only opens if you stick something in both sides at the same time. This is easy if you are sticking a plug in, almost impossible if you are sticking a fork, coat hanger or bobby pin in. The best part is that these little gadgets are actually cheaper than the sliding outlet covers and you don't have to worry where you put them like you do with the little plastic plugs. The only downside is that you have to install them so if you are afraid of doing your own electrical work you'd have to hire someone to do it for you. (One thing I was seeing said that houses built after 2008 all had them, but if your house is older they are worth considering.)

I'm sure we will install other baby proofing devices as time progresses, but so far these combined with watchful parenting are all we've needed. Audrey rarely goes into the kitchen and when she does she's standing next to me. At some point we will put door latches on some cabinets and rearrange things so that she has a couple cabinets full of safe things to play with, but so far she is not interested enough. Even when I offer to let her play in the cabinets she could care less, so I won't install the latches until she is old enough to care. In the meantime it is one less thing to deal with when I am cooking. The only place that needs a latch right now is the one under the sink where the cleaning stuff is kept (though I doubt the vinegar and baking soda I use for most of my cleaning will do much harm the soap would be less than good).

This leads me to wonder, how much does everyone else actually baby proof? Does anyone really use the soft rubber edge guards for the coffee table or the latch for the toilet (until she's potty trained I see no reason to allow my daughter into the bathroom on her own)? I'm sure I will have to tweak my strategies as my daughter gets older, but for now they work well for us. What works well for you guys? I'd love to hear some discussion from any moms that are reading this.
Posted by Theresa at 9:08 AM