We tend to try and stay away from processed and pre-packaged food at our house so I've never understood the point of things like the Gerber Graduates which are basically TV dinners for toddlers. However, days like today it might have been useful, too bad we didn't have any nor did I want to run to the store to get some.

This afternoon was spent running errands and we didn't get home until late. Normally this would have meant a quick stop somewhere to grab dinner on the way home, but we'd decided to do the Eat at Home Challenge for the month of July so while we seriously considered stopping in the end we didn't. This isn't a huge issue for us grown-ups since we can grab a snack now and wait a bit for dinner, but it was pushing A's bedtime so she needed to eat and eat now and preferably a balanced meal. The solution was actually easier than I thought it would be. We cut up some cheese (lunch meat or canned beans might have been better, but I forgot to grab more at the store last night), grapes and half a roll. Not bad, but I really wanted a veggie. After a minute of thinking I invented this recipe:

Put the sliced carrot into a small glass bowl, top with brown sugar and butter and microwave for 45-60 seconds or until carrot is fully cooked. Stir well and blow on it until it is cool enough to eat. 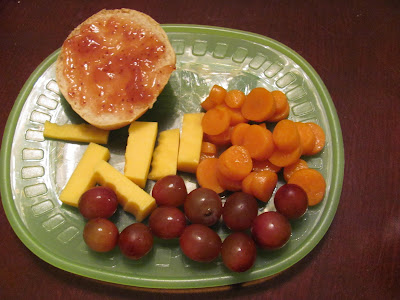 Maybe not the world's healthiest dinner (especially after DH decided she needed strawberry jam on her roll), but it is tasty, filling and reasonably balanced. The best part is that it took less than 5 minutes to throw together which is a lot less time than we would have spent waiting in the drive-thru line and not really any worse than reheating a TV dinner. Plus, it is a heck of a lot cheaper than either of those other options :)

I'm posting this recipe because it would also come in handy on those days when DH and I want to have salad as our veggie because A. really can't handle the lettuce. We almost always have carrots in the fridge so I can mix her up an easy alternative and we don't have to avoid salad and other hard to chew greens.
Posted by Theresa at 8:25 PM